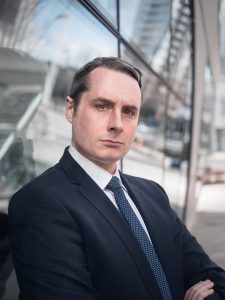 Keith Barron was born and raised in Vancouver, British Columbia. After finishing undergraduate studies at the University of Victoria in 2004, he worked in the software industry for several years before moving to Saskatchewan to pursue his goal of becoming a lawyer.

Keith graduated from the University of Saskatchewan college of law in 2016, and was called to the bar in 2017 after completing his articles with Cowley and Company. During law school Keith received several scholarships and awards, was an editor of the Saskatchewan Law Review, and prepared reports on a mental health court trial program for the Government of Saskatchewan. He also participated in clubs, competitions, moot courts.

When not in the office or in court, Keith enjoys seeing as much of our beautiful province as possible, and catching Canucks games whenever he can.